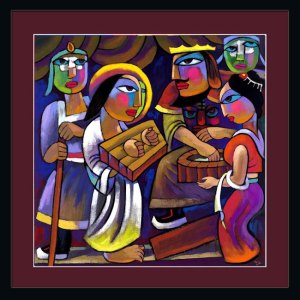 Pilate Washing His Hands by artist He Qi

Reflections on Jesus’ Trial with Pilate.

So when Pilate saw that he could do nothing, but rather a riot was beginning, he took some water and washed his hands before the crowd, saying, “I am innocent of this man’s blood; see to it yourselves.” Matt 27:24

Jesus’ trial before Governor Pilate changes the tenor of the story.  It is no longer a  religious squabble between Jewish sects.  Jesus claims are extended beyond international boundaries, into the very halls of the political power and authority. Rome was known for its power and system of justice.  Who is the real King or Ruler of this world?  Jesus exposes the self-serving character of Pilate and the Roman system.   Though he tries to wash away his connection, Pilate remains complicit in Jesus’ crucifixion.

It is easy to paint Pilate as a self-serving bureaucrat who was either corrupt to begin with or was easily manipulated by the crowd.  Yet I can see the Pilate in me, the part of me unwilling to take a stand against the mob and stand by someone who is innocent.   Are there not people in our community who need someone to be their advocate?

In his book, Tattoos of the Heart, the Jesuit priest, Gregory Boyle, describes his ministry with the gangs of LA.  One day he takes two gang members, Chepe and Richie, on a road trip.   They stop at a Coco’s restaurant for dinner.  Their welcome by the receptionist and other diners is ice-cold.  They stare at Chepe and Richie’s shaved heads, tattoos, and all their baggy clothes gangster garb.

Richie whispers, “We don’t belong here, we should go somewhere else.”

“What are you talkin’ about?” said Greg.

Then the waitress came.

Our waitress is an entirely different story from the frozen and awkward reception we seem to be getting from everybody else. She puts her arms around the “fellas,” calling Chepe and Richie ‘Sweetie” and “Honey” and bringing them refills (“and we didn’t even have to ask”) with extra this and more of that, and supplying Tapatio on demand. She is Jesus in an apron. (p. 136)

When have you experienced either abuse of power or an advocate for justice?

Prayer: Use us, Lord God, as instruments of peace in a world broken by violence, hatred and fear.