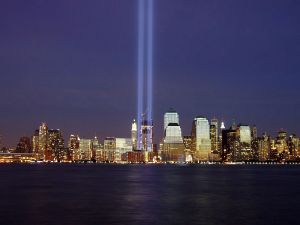 As we approach Sunday and the tenth anniversary of 9/11, I have a mixture of emotions. Like many Americans I have strong memories of that tragic day, first hearing the initial reports on my car radio and then watching the TV news feeds through the day. That evening I led an impromptu worship as people gathered to pray and to grieve. The prayer service had a raw anguished energy as people grappled with their fear and anger that came with the impact of the planes.

The following Sunday churches were packed as people continued to wrestle with the meaning and purpose of such a man-made disaster. Yet that spiritual fervor quickly passed as daily life for most Americans did not change. Many local churches marked the one-year anniversary, but I have not seen or heard of a local church memorial service since 2002.

This Sunday I have chosen not to center our worship around 9/11 but rather on the beginning of the school year and our sermon series, The Narrative Lectionary: The Story of the Bible. If Resurrection Lutheran was in New York City or Washington DC we would respond differently. I understand the national news media’s focus upon 9/11, but I wonder if so much attention only serves the terrorist’s cause, continue to give al-Qaeda the notoriety that it had been seeking.

The day after 9/11 I wrote some of my running buddies about my decision not to run on 9/11 or the day after so as to honor those who died in the Pentagon and World Trade Towers and the many first responders who made huge sacrifices to help others. But the following Saturday I choose to run with my running group as a statement to myself and to others that the terrorists did not win that day. They had not destroyed our culture or community. I would remember but not relinquish.

As I prepare to preach on Genesis 1, I am struck by the contrast of that text and 9/11. In the text we read that God declared that the creation is GOOD. Both Genesis 1 and 2 shows us the beauty and wonder of God’s creation and the special place humanity has.

Yet we know evil has worked itself into our world.  Genesis 3 introduces us to the concept of sin and evil, when Eve and Adam eat from the forbidden tree. Genesis 4-11 reveals how widespread sin and evil are: Cain murders Able (Genesis 4:8), the wickedness of humanity (Genesis 6:5) and the Tower of Babel (Genesis 11:1-9). 9/11 only reinforces that theme of human sin. But human sin does not negate or destroy the underlying goodness of God’s creation. On Sunday, we will remember the tragedy of 9/11, but we will also go much, much deeper and remember the goodness of God’s creation and his power to restore us.

What do you think is an appropriate way to remember 9/11?

Lord Jesus, help me to trust, live and serve you even on the darkest days.