I recently finished reading the Civil War history Battle Cry of Freedom by James McPherson. McPherson writes a powerful narrative in which he highlights some of the most significant turning points in the American Civil War. Though the North had the preponderance of economic and social factors that contributed to the victory, McPherson argues persuasively that there were several points in the war where the Confederacy might have won its independence.

One such moment was the battle of Gettysburg, fought 150 years ago this week. A three-day battle fought on the fields and woods around Gettysburg Lutheran Seminary, the battle had several turning points. On the first day, the Union calvary general, John Buford, made the decision to engage General Robert E. Lee’s Army of Northern Virginia near the seminary so that the Union forces would have time to concentrate along Cemetery Ridge, a good defensible position. Without that choice, Lee’s troop might have taken the high ground.

On the second day, when Lee sent his troops to the south to attack the left flank of the Union line, his troops nearly achieved victory. The Union troops were still marching towards the battlefield and did not have time to prepare a solid line. At one point a hole developed in the Union line and the Confederate troops were advancing to exploit it. The Union general Hancock saw a Union disaster in the making and needed time to reinforce the line. The only available unit to plug the hole and buy time was the small 1st Minnesota regiment, 262 men. Hancock ordered them to attack and they immediately obeyed. 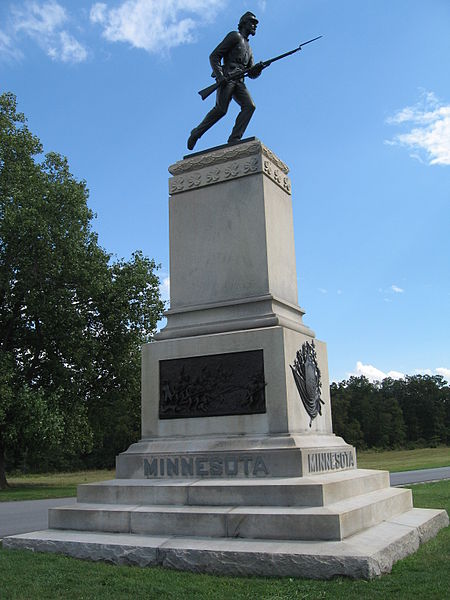 I once walked the battlefield and near this spot is a most impressive monument dedicated to the 1st Minnesota. An inscription on the monument reads,

The order was instantly repeated by Col Wm Colvill. And the charge as instantly made down the slope at full speed through the concentrated fire of the two brigades breaking with the bayonet the enemy’s front line as it was crossing the small brook in the low ground there the remnant of the eight companies, nearly surrounded by the enemy held its entire force at bay for a considerable time & till it retired on the approach of the reserve the charge successfully accomplished its object. It saved this position & probably the battlefield. The loss of the eight companies in the charge was 215 killed & wounded. More than 83% percent. (Wikipedia)

The 83% casualty rate is one of the highest recorded in an American battle unit.

As Americans pause to remember our nation’s birthday, we also remember the tremendous cost in human life that freedom at times demands. The young boys from Minnesota did not know that they were making history or saving the Union. They simply answered the call to serve, to fight and to possibly die.

The brave men, living and dead, who struggled here, have consecrated it, far above our poor power to add or detract. The world will little note, nor long remember what we say here, but it can never forget what they did here. It is for us the living, rather, to be dedicated here to the unfinished work which they who fought here have thus far so nobly advanced. It is rather for us to be here dedicated to the great task remaining before us—that from these honored dead we take increased devotion to that cause for which they gave the last full measure of devotion—that we here highly resolve that these dead shall not have died in vain—that this nation, under God, shall have a new birth of freedom—and that government of the people, by the people, for the people, shall not perish from the earth.

Lord Jesus, we pray for the freedom of all people.

2 thoughts on “Remembering Our Freedom”