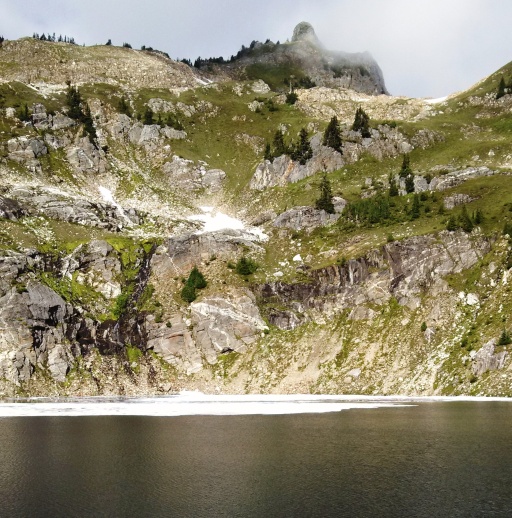 My fourth day on the trail was a joyful one. As I climbed up to Firecracker pass, I passed Mica Lake, ice still lingering.  At the top I was treated a spectacular view both south and north. The cutting wind pushed me down to Fire Creek where I stopped for lunch. The wildflowers and blueberries were abundant and I enjoyed the break. 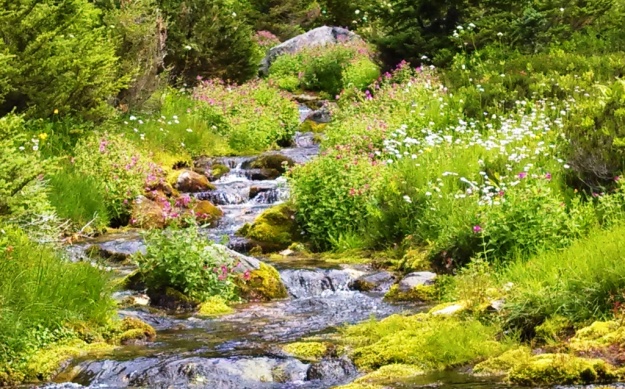 Fire Creek was ablaze with color.

At Fire creek as (I was taking the picture above) a voice startled me with the question, “Is this Pumice Creek?” I turned to see an older woman with a broad hat and friendly face coming from the south. I responded, “I think this is Fire Creek. You already passed Pumice.” We consulted the maps and she agreed.

I quickly learned that her name was Mary and that she was doing the reverse of my hike, starting at Stevens and hiking north to Stehekin. She was hiking alone. In past summers she had hiked often with her husband, but he had died suddenly in the past year. Her voice caught for moment with grief as she described him. Hiking appeared to be part of her healing. She shared that  she would turn 65 in a couple of months and she wanted to see if she could still hike. She obviously could because we were near the half-way point for each of us.

I asked her if in the past her husband did the map reading. “Oh no.” she laughed. “He was as bad as I am. We could be looking at a map of Paris, see the Eiffel tower to our right and the Seine River to our left and still have no idea where we were. But somehow we got where we were going.”

We discussed some of the through-hikers that we had met of the trail. Mary remarked, “I sometimes wonder if in their hurry to cover miles if they see what beauty is around them?” We agreed that our more leisurely pace had value.

We exchanged information about the trail ahead for each of us. She told me where some great campsite were. After filling our water bottles, we lifted our packs and headed in opposite directions, yet holding similar joy.

Later that evening I stopped early at a great campsite Mary had shared and fixed a meal. The day had been filled with joy so I decided to have fun recording my meal prep. Below is a taste of what it is like to camp in the high alpine country.

This is the day the Lord has made let us rejoice and be glad in it. Psalm 118:24  That verse was certainly true for my fourth day.

Little did I know that the fifth day would be a test of my joy.

8 thoughts on “Day Four: Rejoice and Be Glad”