Nearly forty years ago my wife-to-be introduced me to an image of God that has shaped my life ever since.  She wrote me a letter in which she described how God as king invited me into his great heavenly throne room. She described the room as filled with the beauty and wonder fit for a king and how at first I felt overwhelmed.  God then encouraged me to come right up to the throne (like a small child approaching his beloved parent).  With great love and warmth, God’s mighty arms picked me up and placed me on his lap, where I am safe, warmed and filled with love.

I think of that image each Christmas when we read from the beginning of John’s gospel and the coming of the Word of God, Jesus.

But to all who received him, who believed in his name, he gave power to become children of God, (John 1:12) 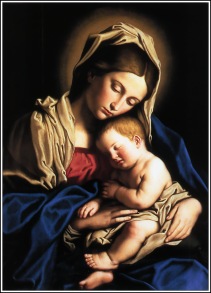 I also imagine the inverse of the image when I read the Christmas story of Luke, when Jesus is wrapped in clothes and laid in a manger.  I don’t think the infant Jesus spent all his time lying in that manger.  Like any proud parent, Jesus was held in the lap of Mary and Joseph.   Not only are we invited to sit in God’s lap, but God invites us to hold his son when we hold a child of God in love.  As Jesus reminded his followers in his parable from Matthew 25,  And the king will answer them, “Truly I tell you, just as you did it to one of the least of these who are members of my family, you did it to me.’

The image blazed with light again this past Sunday when I worshiped with my son and daughter-in-law at Christ Presbyterian Church.  Their evening service, called the Table, normally has communion, but for the fourth Sunday in Advent they had a candle lighting ritual instead.   On the platform steps there were placed over a hundred small votive candles and lighting sticks.  We were invited to come forward and light a candle as a sign that we are “waiting” for our savior.   I lit a candle with the rest of the family, but I noticed that my son did not return to the pew afterwards.  A few moments later my wife nudged me and pointed to the candles.  My son had returned to the sanctuary with our 2-year-old grandson, Jack.  My son was helping Jack light a candle.   Afterwards he and Jack came back to the pew and Jack opened his arms for me to hold him.  As we sang a Christmas carol of Emmanuel, God with Us, I felt tears of joy and grace fill my eyes and flow down my cheek.   I was being held in the lap of God, even as I was embraced by a tiny child of God.  O the wonder of God’s grace.

My wife Carolyn and I hold in our laps two children of God, Grace and Jack.

May you be held by the love of God in this Christmas season.