My friend, Bob Timmons, wrote an article for the Minneapolis Star Tribune called “Making 2017 a year for microadventure in Minnesota’s outdoors”  He inspired me to consider my own micro-adventure: a two night winter campout at Gooseberry Falls State Park.

Though I have done plenty of summer camping and backpacking, I have never tried winter camping.  Living in a state best known for winter, I had to try.

I started by simply setting up my tent in the backyard to see if two sleeping pads and two sleeping bags would be sufficient.  Also to see if my CPAP machine for sleep apnea would work on battery power.  Though it only dropped to 28 degrees that night, I was warm and the CPAP worked fine.

Next I invited my son and grandson to enjoy an overnight campout at a nearby state park.  I had purchased a new 6 person tent and wanted to test it out prior to the Gooseberry Falls trip.  The weather was fairly warm, about 30 degrees for the night low.  We all fun, so my plan moved forward. 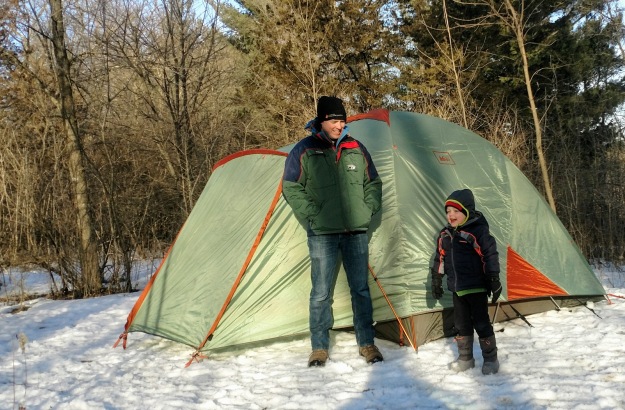 I arrived at Gooseberry Falls State Park on the North Shore of Lake Superior at about 3 pm.  I discovered that the plowed roads had only four campsites; the other campsites were available but I would need to hike through icy snow.  I was the only camper in the park and picked one assessable by car.

My micro-adventure had several lessons to teach me.  All of Minnesota had been experiencing a recent warm spell which melted all the snow in the Twin Cities.  However at Gooseberry Falls there was still some snowpack, but most of it had a thick glaze of ice which made footing treacherous.  There was an open patch for my tent, but the ground was still frozen and my aluminum tent pegs were bending prior to penetrating the soil.  Lesson one: find alternative tent pegs or ways to secure tent.

I brought plenty of clothes with the idea of trying various layers.  My basic down coat and three lower layers all worked well, but my hands were cold much of the first evening.  I was wearing thick gloves but probably should have worn mittens with liner gloves.  Lesson two: explore different glove/mitten options.

It was nearly dark by the time I finished setting up my tent and got a fire going.  My dinner was fairly simply to fix but I hadn’t organized my cooking gear in any reasonable way.  With the light of my headlamp I was able to find the needed items, but only after searching several bags or boxes.  And with heavy gloves the search was more difficult.  Lesson three: organize cook gear prior to leaving home.

The night sky was brilliant with stars; Venus, Orion and the Big Dipper clearly visible.  After enjoying the campfire and a last cup of tea, I climbed into my tent to sleep.  I was not worried about bears (hibernation) and the night was clear so I left several items on the picnic table as I went to bed.   I did bring the water bag into the tent to avoid freezing. 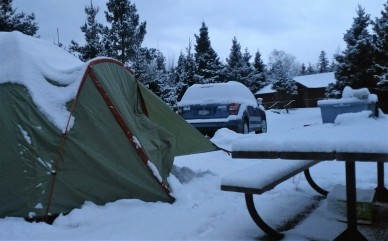 My CPAP machine worked but breathing cold air kept waking me up.  When I climbed out of my sleeping bag at 7:00 am and opened the tent, I was surprised to see three-inches of snow covering all the gear left on the picnic table. Lesson four: put gear away even on a clear night.

I spent the day hiking the trails of Gooseberry falls and taking a few pictures.  The problem remained the patchy glare ice, especially troublesome with the fresh snow covering it.  Though I used my trekking poles and extreme caution, I still fell four or five times during the day.  The austere scenery kept me moving forward.  Lesson five: micro-spikes? 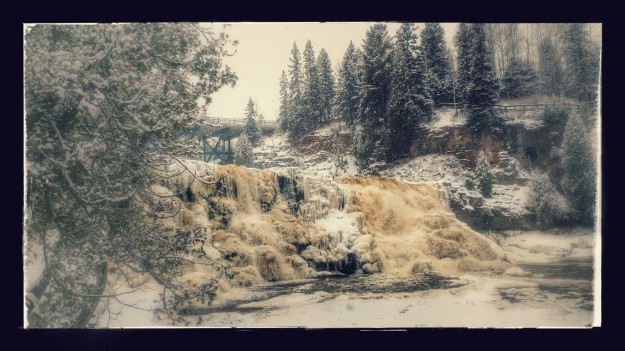 Gooseberry River and Lake Superior in the snow 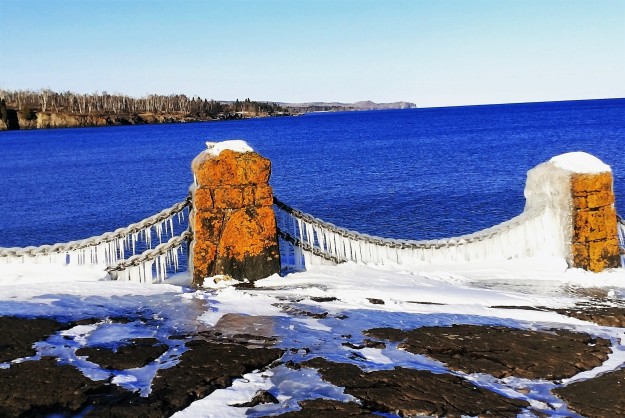 The second evening and night were colder, probably 11 degrees, and I thought about nearby warm motels.  But my goals was two nights so I stayed in my tent through the night, got up, made breakfast, packed up and headed home by 9 am.  Thus forty continuous hours outside is my first microadventure of 2017.  What is yours?