Christina with her sister Suzanne and holding nephew Jack

My daughter, Christina, was not quite three. She was waking up from a nap and my wife noticed that she did not seem fully responsive. Christina’s eyes were open and she was breathing, but her face was blank and she did not respond to any touch or sound. This persisted for a few minutes, so we called 911 and an ambulance came. We rushed off to the children’s hospital, uncertain what was happening, but praying for God’s intervention.

I think about that ambulance ride, when I read the story (John 4:46-54) of the royal official whose son was ill. The official traveled more than twenty miles by foot to Jesus and “begged him to come down and heal his son.” The official was someone who normally gave orders and told people what to do. Begging was not part of his daily life—especially with a wandering, controversial preacher. Yet he was desperate to help his son and if begging was necessary, he would do it.

Many parents would do the same. I know my prayers in the ambulance were a form of begging, “God, help my daughter.” It was raw and real and I waited for God to hear me.

Jesus’ response to the official sounds ambivalent, almost callous, “Unless you see signs and wonders, you will not believe.” It sounds like it is meant for the crowd that surrounded Jesus and not for the official.

Yet the father persisted. As I said he was desperate. “Sir, come down before my little boy dies.”

I hear and empathize with this father’s plea. At times God seems distant and silent, yet I persist in my prayer for God’s assistance.

This is not what the father asked. He wanted Jesus to come with him, to be present and touch his son. I would want the same. I want Jesus to be physically present, reassuring me as much as my child.

Yet the official believed the word of Jesus. He started on his way, not knowing what would happen, but simply trusting in the promise of Jesus. I wonder what thoughts and feelings he experienced as he walked towards home. (I let you read the story to discover how it concludes.) 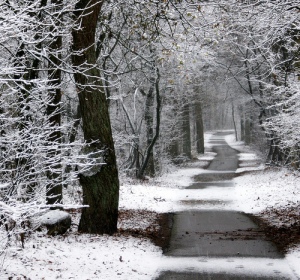 Many parents live right there in the story.  We are walking the way, unsure of the future.  We have the promise of God’s love and healing, but are uncertain how it will unfold. We walk, trusting in the promise of God for our children and for ourselves. We are on the way, but the way seems dark and cheerless.

Shortly after my daughter arrived at the hospital, we met with doctors and discovered that she had experienced a mild form of epileptic seizure, something that could be treated with a prescription. They assured us that she would grow out of it. And she has.

Still I remember clearly that feeling as we drove to the hospital, the begging quality of my prayer and the simple trust in the promise of God’s love. We all walk by faith and not by sight (2 Corinthians 5:7).  We try to remember that Jesus is the way, the truth and the life (John 14:6)

When have you walked by faith and not by sight?

Lord Jesus, I believe, help me in my unbelief.

I awoke early, packed my backpack and headed up the trail. The trail climbed steadily as it followed the North Fork of the Big Thompson River. Breaks in the forest gave me opportunity to scout the high country near Mt. Dunraven.

I anticipated an easy day of backpacking to my next campsite, Lost Meadows. This was only a mile below Lost Lake, a high alpine tarn that is the end of the maintained trail. It was only five miles between campsites so I decided to take a side trip.

About halfway between Silvanmere Campsite and Lost Meadow was a spur trail that climbed the north side of the canyon to Stormy Peaks Pass. I left my backpack at the trail junction and started the 2000 foot climb to the pass with just lunch and water. The trail started out a series of switchbacks that quickly climbed above timberline. Here I encountered a flat shelf in the ridge where the National Park located the Stormy Peaks South backcountry campsite. It certainly had a spectacular view of the upper Big Thompson canyon, Rowe Peak and Mt. Dunraven.

The trail continued an additional 1.5 miles to pass. As I climbed towards the ridge line, I had to stop several times to scout how the trail proceeded. There was some thick growth of evergreen bushes and small trees where the trail seemed to disappear. I would be merrily hiking along and suddenly there was no trail beneath my feet, just alpine meadow. Now the meadow was fine for walking and I could find my own way, but the trail used the most efficient means to climb the ridge. It became a sort of game to find the trail in the midst of meadow and brush.

I was reminded of a conversation Jesus had with his disciples. In John 14, Jesus is preparing them for his coming crucifixion. He says to them, “I go to prepare a place for you. . ., that where I am you may be also. And you know the way to the place where I am going.”

Thomas responded, “Lord, we do not know where you are going. How can we know the way?”

Jesus said, “I am the way, the truth and life.”

Jesus is the way, the trail, that we seek to guide us through life. But it can be so easy to slip “off trail”, to think that I know the way on my own and don’t need Jesus. As I searched for the trail that morning, I reflected on who is my true trail guide.

I finally reached a small peak just south of the pass. I knew that the next day, I would face the most difficult part of my backpack, climbing up over Mummy Mountain Ridge and down into the Black Canyon Trail. From the overlook near Stormy Peaks Pass, I could see the first half of my next day’s climb. It looked challenging but doable, so I hiked back down to my backpack and continued on to Lost Meadow campsite.

As I settled in for the night, I knew that the next morning I would be off trail for about eight miles, a serious challenge for me.  But I also knew that besides my map and compass, I had a good trail guide walking beside me, giving me encouragement, hope and wisdom. My simple prayer was, “Jesus, stay close and keep me on your path.”

Lord Jesus, you are the way.  Keep me close to your path for my life.