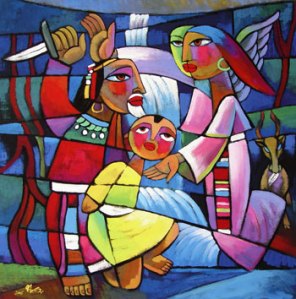 The Old Testament disturbs many readers with its many violent and destructive stories, at times commanded by God. One story in Abraham’s life has challenged many readers. God commands Abraham to take his son, his only son Isaac, to a mountain and to offer him as a burnt offering to God (Genesis 22:2). Abraham faithfully follows the instructions and takes Isaac, a knife and wood for the offering. In a very poignant scene, as Abraham and Isaac climb the mountain, Isaac carrying the wood, he calls out,

I wonder what Abraham was thinking as they walked together. Isaac was his only son, the long-awaited promise from God. Clearly Abraham loved and cherished his son. Yet he faithfully followed God’s command. Perhaps he had half-expected it since many of the surrounding gods in ancient Palestine required such a sacrifice of the first-born child. Still I think Abraham’s steps were as heavy as his heart as together they walked up the hill. And then, when he actually bound Isaac, laid him on the wood, and raised the knife to kill him, I simply go numb.

Before we become too critical of the violence in this ancient story, let us not forget the violence in our own culture. In the last century, humanity has turned death into an industrial machine, killing people by the millions. Last week a family home in Oakdale erupted in murder and suicide. Violence is not simply an ancient problem.

And we read this story, knowing it is a test from God (Genesis 22:1). God had to see if Abraham would be faithful in trusting God. As Abraham raised the knife, God again spoke,

“Abraham, Abraham!” And he said, “Here I am.” 12 He said, “Do not lay your hand on the boy or do anything to him; for now I know that you fear God, since you have not withheld your son, your only son, from me.”  And Abraham looked up and saw a ram, caught in a thicket by its horns. Abraham went and took the ram and offered it up as a burnt offering instead of his son. (Genesis 22:12-13)

Trusting God can be very difficult at times. Yet God proves to be faithful to Abraham, Isaac and to all humanity.

Lord Jesus, thank you for absorbing our human violence and sin on the cross.

What an incredibly simple start.  After the mess of Genesis 3-11, God finds the best solution: an elderly childless couple! Abraham and Sarah become the start of God’s rescue plan for creation. They are blessed in order to be a blessing to others.

God said, “I will make you a great nation, and I will bless you and make your name great, so that you will be a blessing.” Genesis 12:2

We so often seek blessing only for ourselves. But God showers us with generous blessings, so that we can be blessings to others.

How have you been a blessing to others?

Lord Jesus, make me into a blessing for others today.