One of my passions is consistent aerobic exercise. However my passion has been inconsistent, waxing and waning through the years. Through most of my adult life, I have had spurts of consistent running, only to be sidelined by the “urgency” of my daily life. This was especially true when my children were little. 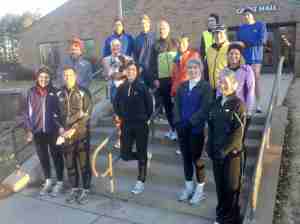 The Running Club in a non-running moment

Then in the winter of 1999 Tim Torgerson approached me about starting a church-based marathon training group. He was looking towards October’s Twin City Marathon. I was gullible and naïve and so said yes. The training group started in March, running together on Saturday mornings. Each week we were accountable to each other. I had a training schedule to keep and people checking on me.

However a dreaded “running injury” struck and I had to take a month out in June for physical therapy. Still I felt this need/desire to be back with the group as quickly as possible. Finally on October 3, 1999, I finished TCM with seven others from the group. After our suceess “the training group” became a year-round running club.

Over the next ten years the St. Andrew’s Running Club gave me the support and encouragement to finish ten marathons. Last summer when I finished Grandma’s, I knew I needed a break to recover from some nagging injuries. Later I said good-bye to St. Andrew’s Running Club as I followed God’s call to Resurrection Lutheran. After a long winter of physical therapy, I am now finally ready to start running. Last week I was able to do three runs of 2-3 miles.

I have also discovered a new joy with cycling. Last Wednesday Dave Johnson from Resurrection showed me some of the great bike routes nearby. Yesterday I biked with Tim and Dan and needed their support as I experienced my first three flats.

Through these experiences, I have discovered that I benefit from a group to help me stay consistent in running or cycling. Which leads me to a question: Is anyone interested in a running or cycling club based here at Resurrection? Let me know.

As iron sharpens iron, so one man sharpens another, Proverbs 27:17

Lord Jesus, lead us into the fellowship groups you want us to have so that we might live the vibrant life.